Yes, we know we just lost another football game to you. Gloat if you must. But perhaps what’s more annoying than repeatedly hearing about this loss is that you constantly berate the fact that we are Wolverines even though there are not wolverines in the state of Michigan. And yes, we also know we don’t have a “cool” cartoon-y mascot like whatever-your-mascot-is that dances around the field.

While both these facts are true, the reasons behind them make Michigan look all the cooler.

So to start with, the wolverine is not the state animal of Michigan. And there are very few, if any, actual wild wolverines in the state. Wolverines live in the northern regions of Europe, Asia, and North America. They are carnivorous and nocturnal, and sadly, endangered due to humans. But, in the absence of humans, they are more than capable of taking care of themselves. Adult males are 30-50 pounds but can take down prey much larger than themselves, and they have long, ridiculously sharp claws that helps them do this. 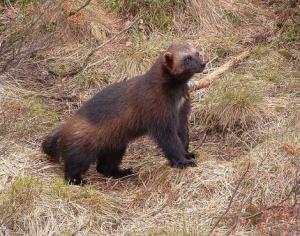 Our nickname comes from the Toledo War of 1835 – Michigan and Ohio decided to fight over the Toledo strip (in retrospect, that was a bit of a waste, why did we ever want the Toledo strip?). According to the myth, the Michiganders fought so viciously that the Ohioans claimed they “fought like Wolverines”. Ohio ended up with the Toledo strip and two years later, the University of Michigan officially adopted the wolverine as the school mascot. So in the end, we got a bad-ass nickname and Ohio got the land that would become Cleveland and some corn fields. I think its pretty clear who the real victor was…

And, contrary to belief, we did have mascots once. It started with a stuffed wolverine named Biff (who now resides in Yost Ice Arena in honor of Fielding Yost, the man who first set out to obtain a real live wolverine for the University).

Yost searched long and hard for a wolverine, and supposedly even wrote to fur traders up north asking for a wild one to be sent to Ann Arbor. But he was unable to obtain one.  This changed when the Detroit Zoo acquired 10 wild wolverines from Alaska in 1927. Yost immediately made a deal with them to have 2 wolverines transported to the Michigan Stadium every football Saturday.

The two wolverines that were lent to the University were nicknamed Biff and Bennie, and the initial plan was to have them walked around the stadium on leashes. I think its pretty clear that this plan couldn’t have ended well, and luckily was never put into effect. Instead, they were carried onto the field in a cage. 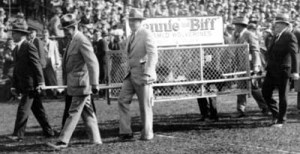 Bennie bit through a cage bar, it became increasingly clear that wolverines were more vicious than previously believed, and liability of confining a ferocious rip-your-face-off wild animal in a stadium with thousands of people meant that the practice ended pretty quickly. The wolverines only lasted one season (or a couple, different sources cite different time spans). They then went to live at the University Zoo and the Detroit Zoo, and the university hasn’t had an official mascot since.

So yes, it is true that we don’t have a mascot, but once you have real live wolverines it is pretty silly to go to a dancing cartoon character. There have been several attempts to reinstate a mascot, usually a cute wolverine drawn wearing a sweater with a giant “M” on it, but none lasted long – apparently, it’s either a live, vicious, foaming wild animal or nothing.