In keeping with the theme of logo mythology (see my post about Godiva), I have always loved the Starbucks logo and am annoyed that they are constantly “modernizing” it, taking away all the imagery it represents. The original logo, back in 1985 when Starbucks first started, was this:

From the FAQ page of Starbucks.com, they say they “wanted to capture the seafaring tradition of early coffee traders”. And they did so rather well, with the twin-tailed mermaid. However, the symbolism associated with them is perhaps more controversial than Starbucks, as a national corporate company, would like, which is probably why it keeps getting simplified.

A twin-tailed mermaid, sometimes called a Melusine or a siren, and is commonly portrayed as being half-serpent/fish and half-human. They are a symbol of transformation (specifically relating to alchemy) and also symbols of unity that link earth and water, and body and soul. They could be evil, like the sirens of Greek mythology who lured sailors to their deaths, or simply a feminine spirit of fresh or ocean waters that bestow love on humans.  In mythology the are commonly represented in a very similar manner to the original Starbucks logo: 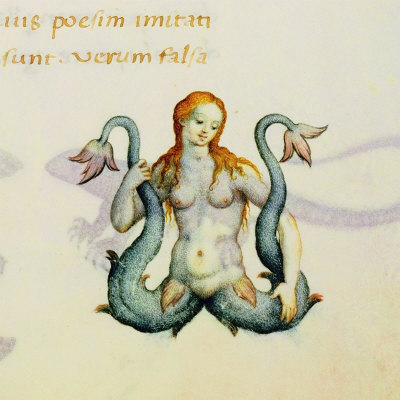 The most common story involving a twin-tailed mermaid is that of Melusine, a beautiful woman who turned into a serpent from the waist down while bathing. Her suitor, a variety of different men depending on the source, met her at a magical enchanted fountain in the middle of the woods (an innocent maiden alone at an enchanted spot in the forest should always always always raise a red flag, but apparently he didn’t think it was that strange). She agreed to marry him under the condition that he never disturb her on Saturdays when she bathed. He agrees to her wishes and they get married and live happily ever after.

For a while anyway, but eventually he gets curious and suspicious of what she does alone and sneaks a peek, only to see her in her serpentine form. He is horrified and she is angered by his betrayal, so she turns into a full-on dragon in a fit of rage and she leaves him in a fury. Basically, moral of the story is: there is a monster inside every woman. Even though it was his mistrust and disobedience that caused the whole incident, it was a sexist medieval metaphor for the duality of female nature and the malevolent forces that could reside in all women.

Twin-tailed mermaids also represent fertility in most cultures they are found in, which is what the Starbucks logo most closely resembles – the bare breasts and the two tails spread apart say “come hither” in a very obvious way. This logo has actually sparked controversy in the past, which may be why Starbucks seems to be systematically censoring their logo, first covering the breasts with hair, cropping out the view of the navel, and then omitting the images of the tails.  Now it has become so cropped that it is hardly noticeable as a mermaid:

So if you take anything away from this, I hope you have learned two things: