As I mentioned in a previous post, Sláinte, the Guinness Storehouse was one of my favorite attractions in Dublin. I would highly recommend, nay require, that any visit to Dublin be accompanied by a tour. For a mere €13 (student price) we had an entire days worth of entertainment, learning, and of course drinking.

The storehouse is easy enough to find; ask anyone in Dublin and they can probably give you directions. A city bus drops you off almost in front of the old Storehouse, which is no longer an active site in the brewing process and has been transformed into a museum and showcase for all things Guinness. You arrive at St. Jame’s Gate and begin the tour with a walk through the winding streets of mini-factory town.

The abandoned industrial feel of the area provides a great build-up to the actual tour, which has the same feel all throughout. You enter through the atrium, which is designed to look like a giant pint glass going up to the 7th floor of the Storehouse and would hold over 14 million pints of Guinness if filled. Immediately you see walls lined with all the styles of bottles Guinness has ever used in their nearly 250 years of brewing. Then, behold, right in the center of the atrium floor, under a giant circle of glass, is the actual land lease that Arthur Guinness signed in 1759 securing St. Jame’s Gate as the home of Guinness for 9,000 years. Here, on this monumental spot, you can wait for a free guided tour that begins about every 10-15 minutes or proceed onward on your own.

The tour takes you through the main steps of brewing beer and, in a manner reminiscent of Willy Wonka’s chocolate factory, there are mazes of walkways, a room filled with barley (which you will be picking out of your clothing, shoes, and hair for days to come if your friends are as immature as mine), and even a waterfall. Of course its all educational – there are interactive displays for each of the 4 main ingredients that goes into Guinness (water, yeast, hops, and barley) which show where they come from and how they are used to make the magical beverage known as Guinness.

So, along the way you learn about the barley and hops growing process, where the water comes from, how it is mixed and stored and fermented, and the history of beer brewing. You also learn how coopers (barrel makers) play an important role in the brewing process, as well as the farmers, workers, and brew masters.  There’s working models of the old machines used in the fermentation process, and a walk inside a giant barrel reveals a looping video explaining the brewing process from the head microbiologist Master Brewer himself.

As it turns out because it is exported all around the world, Guinness played a large role in some parts of the Industrial Revolution and the development of transportation technology in the 20th century. There are lots of great artifacts from the trains, planes, ships, and trucks that have all worked to transport this fine beverage all around the world.

After this, you enter the tasting room, where attendants present each visitor over the age of 18 with a mini-pint of Guinness fresh from the keg line and guaranteed to be served at the optimal temperature and pressure, just to get you warmed up for the actual regular-sized pint you can get at one of two places in the factory. The 4th floor offers the chance to learn to pour the perfect pint and you get an awesome frame-worthy certificate upon completing this feat. According to the official guidelines, a pint of Guinness should take about 120 seconds and should be the product of a “double-pour” to ensure the proper volume of stout is added to the glass. This specialized pouring process sparked the famous Guinness advertising slogan “good things come to those who wait”.

And something else you will learn straightaway while touring the Storehouse – the Guinness company is the master of advertising. By the end of the tour I was thoroughly convinced that I should definitely be drinking more Guinness in my daily life. They have had some really great slogans and mascots over the course of their history, not to mention the famous “harp” logo.  In the early 20th century it was a popular argument that Guinness was good for you because dark beers had been suggested to slow the build-up of plaque in the arteries, so “Guinness for strength” and “a Guinness a day” were common slogans.

The company no longer makes claims about the health benefits of their beverage, but the classic advertising slogans remain. My favorite marketing for Guinness is the zoo animals of the 1930’s, which prominantly feature Gilroy the zookeeper and the “Guinness family” of mascots, including the kangaroo, seal, ostrich, lion, and perhaps most famously the toucan. 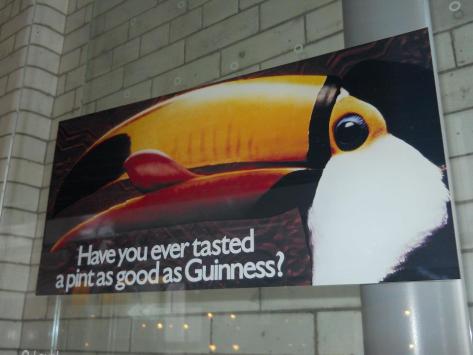 Think of any advertising scheme and Guinness has probably employed it at some point in the past couple hundred years. And the Storehouse features a large advertising museum which houses examples of many of the interesting ads that have promoted Guinness over the years – this was actually more interesting than it may sound because some of the ads are pretty hilarious and outlandish by today’s standards (and some are just plain politically incorrect as well). 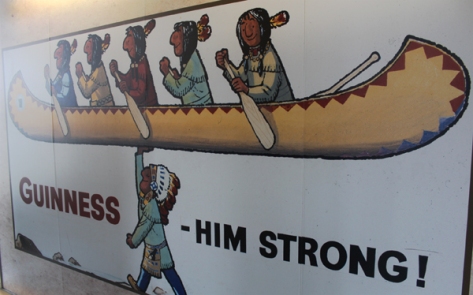 Upon reaching the very top of the Storehouse tour, you find yourself in the Gravity Bar, the top of the pint glass structure, where you can also get your complimentary pint of Guinness if you didn’t get it at the Perfect Pouring Station earlier. The Gravity Bar offers a complete 360-degree view of Dublin and the surrounding countryside and is the perfect finishing touch to the tour (unless you count hitting up the bars of Dublin for more Guinness after leaving the Storehouse like we did).

This was the view of Dublin as seen from the Gravity Bar of the Guinness Storehouse, 360-degree views from the 7th floor!